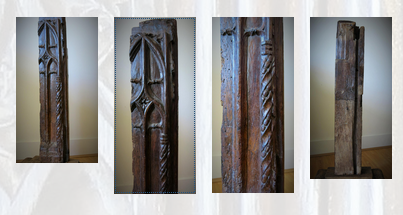 Gothic art and architecture was at one point in time associated with the dark and mysterious. But in reality what the Gothic style did for the churches was the exact opposite. It brought sunshine to the holy churches with its unique and peculiar designs. With its roots in the Romanesque architectural style, this style primarily developed into the ecclesiastical architecture.

Examples of the gothic art were seen in many churches, cathedrals and abbeys, castles, palaces, guild halls, civic buildings and the like. This style flourished in the medieval period during the late 12th century right until the 16th century.

Smaller and portable sculptural pieces were also a very popular feature of the Gothic period. Gothic sculptures were created as devotional objects for homes or were donated to the local churches. Apart from these there were also sculptures made by the urban artisans which included sculptures made of ivory, bone and wood for church and domestic use. Other typical forms included devotional polyptychs, single figures, mirror cases and elaborate caskets.
Some items are made to look gothic. Take for example this Gothic Oak Roof Boss. It is a nice small oak roof boss of gothic quatrefoil form , Interestingly stylised with thistles and foliage. Although looking very medieval this little boss is around 200 yrs odd later in age probably 18th early 19th century & British.
Another is this Gothic Oak Bench End orginalting from Cornwall in the 1400s. It is a large fragment of a Cornish Oak bench end, Gothic Lancets with  rare barbers pole ornamentation. It has superb surface and colour.

If you are particularly interested in the Gothic art and sculptures, do visit David Charles Dodge Antiques to have a look at our collection from the Gothic era. We have some fabulous items for you.